Ronnie wants a job. You had better believe it. 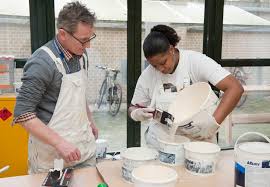 Ronnie sits slumped in his seat; impassive, listless and avoiding eye contact. In the chairs around the room the various professionals shift uncomfortably. This is the regular ward round at a rehabilitation unit for people detained under the Mental Health Act. As an alliance of organisations we are collectively seeking to support people to live a fulfilling life in the community and the first step is to help people to recover and stay well.

Directed by the doctor chairing the review meeting we each introduce ourselves. Ronnie is clearly familiar with the roles of most of the people present. I’m preceded by the psychiatrist, senior nurse and the pharmacist. Then it’s my turn and I explain that Thames Reach supports people to manage their home and find work. Ronnie rapidly adjusts from being virtually supine to upright and alert. ‘Can I speak to you after – I want a job’.
Regretful sympathy fills the room like an invisible mist as the group subliminally shares the view that a job is, well, rather aspirational. The exchanges that follow focus on the predictable areas of medication levels and behaviour on the ward before the doctor impressively turns the conversation back to ‘hopes and dreams’. Defiantly Ronnie confirms that he wants a job and it is agreed that helping him ‘improve his skills-set’ is something the ward team will give attention to.

Trudging across the hospital car-park I reflect once again on the divergence between what the service user wants and what the support services think they need, which invariably comes to a head over the importance of work. At Thames Reach we are undertaking our regular survey of service users’ needs and, as usual, will ask about attitudes to paid employment, though we know the answer already because it’s been the same in the last three surveys. Around 70% of our service users want to work and fewer than 10% are working. If there is one thing we can be certain of, paid work is a top priority for the people we support and to justify our commitment to being a user-led organisation we must do more to help them achieve this.

We know perfectly well why this is because theirs is exactly the same motivation that makes you and I determined to get, and retain, a job. Being without work and wholly dependent on benefits is a restrictive and demoralising existence. The Department for Work and Pension’s own analysis [1] evidences that, of the groups at higher risk of poverty, the unemployed face the highest risk of all with 72% experiencing poverty after housing costs are taken into account. A recent report from the Institute for Fiscal Studies[2] on living standards, poverty and inequality in the UK concluded that a reduction in the number of households with no one in work has been a key factor in preventing inequality from growing during the period of recovery from the recession.

You might assume that nothing would be more likely to shape the priorities of housing and homelessness organisations than the need to tackle poverty and reducing inequality. Yet, it appears, focusing on employment is something that we do not feel terribly comfortable about. Assisting people like Ronnie to get work is a long hard slog and entry level jobs are invariably poorly paid. ‘We wouldn’t want to be seen to be furthering the government’s agenda’ I was told at a recent meeting of organisations seeking to end discrimination in the job market for people with criminal records, later clarified as meaning that we shouldn’t be supporting people to get ‘any old job’.

I struggle with this as, apart from it being the service user’s decision not ours, how do you get the next better job without doing the first job?  And why should we think our obligations stop after that first job has been secured rather when the person is earning enough to feel they can fully participate on an equal footing in daily life and can confidently wave us goodbye?

I am under no illusions about the gross disadvantage facing many homeless and marginalised people seeking to enter the job market after many years of unemployment and the Herculean efforts they must make in order to compete for work. Inequality arising from a damaged education, a common experience for many of the people we support, creates a cruelly uneven playing field as I was reminded by a service user who recently completed one of our volunteer training programmes. He noted that now, at 31, he was going on to do a diploma in social studies and counselling. ‘I stopped attending school at 13 and it’s taken me a while to catch up’ he explained, with an understated stoicism that was both poignant and inspiring. Yet many homelessness organisations don’t even seek to actively employ former homeless people themselves. Can there be a more unthinkingly brutal vote of no confidence than this?

So we wince and stick to safer areas, especially those which give us the chance to take care of people, preferably for long enough for our indispensability to be ineluctably established. At a recent conference I attended, enjoyable though it was, workshops majored on those areas where homeless people are exemplified as vulnerable, if not permanently impaired. They included caring for people with complex needs, addressing psychological trauma and supporting people with dementia. There was nothing at all on employment.

Certainly getting an entry level job will not immediately spring a person from the poverty trap but that palpable sense of liberation I have been privileged to witness when a person gets paid work after months or years of trying creates enormous, transformational momentum.

And ambitions for our service users should focus not only on liberation from poverty and inequality but also, I’m afraid to say, release from the smothering embrace of the homelessness sector with our apparently inexhaustible need to be needed.

dangermouse said…
Too true. Many thanks for having this changing attitude which hopefully more organisations will take up
4 December 2017 at 16:00