Missing documents and Schubert: losing and finding your identity in the Ukraine and Slovakia

Beside Kiev railway station there is a space the size of a small waiting room and on this dank December evening the first homeless people are filing in, some a little hesitantly as this is a new destination; until recently they were sleeping rough outside and in derelict buildings or tunnels – anywhere to escape the vicissitudes of the harsh Ukrainian winter.

The room has been made habitable through the installation of benches by Depaul International in response to an urgent request from the beleaguered railway authorities, struggling to cope with the hundreds of destitute people living rough in the vicinity of the station. I and fellow trustees from the London Housing Foundation (LHF), a grant-making charity providing financial support for Depaul’s work in the Ukraine and Slovakia, are visiting to witness at first hand the homelessness situation in these countries and the impact of Depaul’s work.

Svetlana shows no reticence in talking about her situation. Following the loss of her identification documents she has been sleeping rough for a number of weeks. Despite an itinerant lifestyle Svetlana has been working regularly, but now the loss of her papers has rendered her unemployable. Given that the night ahead will require her to sleep sitting upright squeezed between other bodies, Svetlana is unnervingly cheerful though her chirpiness, she explains, is due to relief at not having to sleep outside in sub-zero temperatures.

In the Ukraine the consequences of being without the right documents cannot be over-emphasised.   This is not an issue akin to the temporary inconvenience suffered by a UK rough sleeper awaiting the arrival of a replica birth certificate to have a benefit claim authorised.  In the Ukraine there is an incessant requirement for papers to be presented and stamped. Documents are essential for securing accommodation, medical care and legal employment and the result of being without documents is invariably homelessness and destitution.

Throughout our visit it was reported with depressing consistency that often more than a year will elapse before lost documents are replaced and from support staff working with the homeless we heard that, astonishingly, some people had been without documents since the time of the dissolution of the Soviet Union in 1991.  We may rhetorically speak of homeless people being invisible, but in the Ukraine it seems there is a group of destitute people who are essentially stateless, non-persons.

In the last few years Depaul has worked with tenacity and imagination to provide basic services to a vast number of homeless people in the Ukraine and Slovakia. In Slovakia’s capital Bratislava we visit a former warehouse, upgraded with financial assistance from the LHF to shelter the homeless of the city.  By UK standards it is rudimentary. The cloying, sickly-sweet smell of unwashed bodies hangs in the air.  The year before the shelter opened, 26 people died on the city’s streets during the brutal winter months. This figure fell to zero the year the shelter became operational.

An hour’s drive from Odessa in southern Ukraine, Depaul has built two houses, one for men and another for women.  At the women’s house we meet three women determinedly re-building their lives. They have bleak stories of violent relationships, addiction and children taken into care and speak with quiet dignity about their hopes and dreams and the benefits of being away from the city and its tensions.  Here, they agree, ‘it is a fairy tale’.

Then one of the women who has spoken movingly about her former life as a musician opens up a battered violin case.  Tenderly taking out the instrument she embarks on a beautiful rendition of Schubert’s Ave Maria.  Somehow, the importance of identity, self-worth and hope is perfectly encapsulated in the aching melancholy of the piece; we are stunned by this special moment.

We spent three days witnessing the struggle of people painstakingly attempting to rebuild lives from the rubble of traumatic pasts in conditions that seemed at times unremittingly bleak. Systems, especially those requiring documentation to negotiate them, appeared designed to create barriers rather than to offer hope or encourage initiative.  The resilience and unquenchable spirit of many of the homeless people we met in the face of such obstacles was remarkable.

We are, of course, committed to assessing the impact of all the services we fund.  But, in truth, I have no idea how Depaul’s essential work can be given a real numerical or financial value. What is the worth of preventing 26 people dying on the streets of Bratislava?  Measure that my friends – measure that.
This blog was originally published in Inside Housing on 22nd January 2016 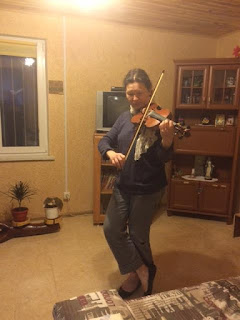