Homelessness - an event, not an imposed identity 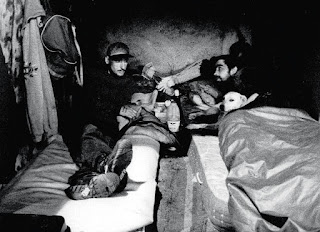 “Where have the homeless moved to? Can you help us find them?” asks a woman on the phone. It’s a bad line and there is traffic noise in the background. “We are seeking out junkies, winos and vagrants.”  It occurs to me that perhaps she is being deliberately provocative by using such pejorative terms but no, after a few questions it is clear that she is sincere.
She is with a church group which has travelled into central London, moved by “the plight of the homeless”. Central London is overburdened with vast numbers of visiting soup runs, so I don’t offer directions but refer her to Housing Justice which does an excellent job working with faith groups to ensure their important contribution is coordinated and effective.

Then I muse over her language and what it tells me about how people who are homeless are perceived. I am influenced by @bullringbash who tweets in an illuminating way on homelessness issues, a man who by his own admission spent destructive years in the 1990s at the Bullring near Waterloo Station, London, one of the most notorious rough sleeping encampments.  He has strong feelings about the phrase ‘the homeless’; its dehumanising impact and the impression it gives of a homeless tribe. In a recent tweet he went further, commenting: “No such thing as homeless people, only people who are homeless.”

This notion that the homeless can be defined and analysed in the way that we might an ethnic group is enhanced by research that seeks to establish an average age of death of a homeless person. The age currently favoured is 47 but has, at different times over the last five years, been announced as 40.2, 40.5, 42 and 44.

Delving into this research a little further it becomes evident that the problem is definitions of the homeless varies considerably, which is hardly surprising given that homelessness covers so many situations. The range can include not only rough sleepers, families in bed and breakfasts and hostel residents but squatters and even, in a piece of research surely straining the definition beyond breaking point, someone who has had to leave ‘a negative home environment’ to sofa-surf for as short a period as a week.
The public perception of the homeless, embraced with insouciant condescension by swathes of the media, seems to be of a badly dressed man with a beard, a sort of hipster with a grubby collar and poor dress sense. This is how The Daily Telegraph reported on Cristiano Ronaldo disguising himself as a homeless man, before showing off his football skills in the centre of Madrid: “Real Madrid star dons fake beard and fat suit before posing as a tramp.” And when on social media people describe themselves as looking homeless as they frequently do, they mean looking unkempt, a bit rough.

The legitimate concern of @bullringbash is that the concept of ‘the homeless’ carries with it a stigma that can continue to blight a person’s life well after their homelessness experience should have dimmed to an uncomfortable memory.
Surely homelessness should be regarded as an event and not given the authority of an imposed identity? I share his concern about the implications of propagating this ultimately toxic view of the homeless as a homogenous group. There is something gratifyingly comforting about the concept of helping the homeless. I fear that it brings out the worst kind of paternalism in us. That sense of personal fallibility in the individual leads inexorably to the next conclusion; that the homeless, rather like the poor, will always be with us.
Recently walking through the West End, absorbed in my own thoughts, I found myself confronted by a man who claimed to remember me from the time when I was working with rough sleepers 30 years earlier. Looking up, I could immediately remember his name and even where he slept rough. I braced myself to hear a story of a fall from grace, an incident that had brought him back onto the street and, rather insensitively, I asked if he was back sleeping rough. He looked puzzled but then burst out laughing.

“No, no,” he exclaimed. “You got me the flat, then I got a job. I work in IT now and own my home.”  We talked briefly about when he slept on cardboard in a shop doorway. “Bad days,” he said, momentarily looking grim. Then he shook my hand and strode off towards Leicester Square tube station, not one of the ex-homeless, but someone for whom homelessness was a shocking, unpleasant aberration.


With special thanks to @bullringbash

A version of this blog was publish in Inside Housing magazine, October 2015.