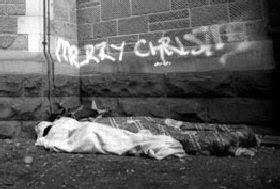 It is the last meeting of the Saturday Club before Christmas. Next week it’s the Christmas meal. Roy, the elected head, has negotiated a price of £12 a head with a restaurant near Leicester Square. ‘That’s turkey with all the trimmings’ he explains. The group is just about scraping by financially. Members are pleased with the deal Roy has struck.

There is an end of term feel to the Saturday Club. An apprehensive mood prevails as each member ruminates over what the festive season may bring. The conversation revolves around memories of best and worst Christmas days. Each person, it seems, has something in common; they have all experienced a Christmas day when they have been on their own. Patrick describes spending Christmas day 1973 in a derelict house without windows in Deptford, south London.  A new arrival to the country from , he was unaware of the services available to the destitute and tried to sleep away most of the day, waking to find himself gently keening for his family back in Athlone. That same year Bill had plenty of company as he was serving his last year in prison and remembers opening a soap parcel from his family, the arrival of which offered hope that they were not completely estranged.

Ah yes, ‘the family’, that source of sustenance and love, providing stability and identity. The very same kinship structure that can also produce festering rivalries and damaging early life experiences of the type many Thames Reach’s service users spend the rest of their lives striving to recover from. The supplements are full of ‘what Christmas means to me’ items, the featured celebrities entwining family and Christmas with unerring predictability. Likewise, the men and women of the Saturday Club clutch at memories of family and hopes of happy engagements with loved ones at Christmas.

Most stories illustrate a complicated mix of feelings. Trepidation based on fear of rejection, determined resolution to ‘not care’ if the invitation to Christmas dinner does not materialise and gratefulness that past misdemeanours have been forgiven. Ben, meanwhile, is bracing himself for Christmas in the knowledge that he won’t be with his children. Already he is meticulously planning to keep remorselessly active to avoid lapsing into maudlin feelings – and worse.

Lee’s worst Christmas was seven years ago when, unable to cope with his mother’s death, he spent Christmas week alone, visiting her grave and knocking back a bottle of scotch a day. Then he takes me on a tour through his best Christmas’, each one featuring his wider family – brother, nieces, nephews and cousins sharing Christmas dinner with all the trimmings. Becky’s memories also centre on the family as she talks wistfully about Christmas 1988 at her uncle’s house in east London, sharing a Christmas dinner Caribbean-style with her cousins.
As we talk I reflect that, of course, it is to be expected that the Saturday Club members mirror the wider cultural norms and expectations of the society of which they are a part, even whilst they frequently feel disconnected from it. For example, the ambivalent attitude towards alcohol that is apparently hardwired into the British culture is exhibited in its full destructive glory in two members of the Saturday Club, their lives blighted by drink problems, who select as their best Christmas days ones that they are unable to remember because of the relentless drinking spree that spread through the day and beyond. Alcohol consumption increases by 40% during December and every year over 8,000 people die in the UK of alcohol-related deaths, a figure that is 15 times greater than the number of heroin-related deaths.  Don’t fool yourself, we, the wider citizenship, are all complicit in the Saturday Club drinkers’ ruinous denial.

Sitting alone, one member is in a particularly melancholy mood.  He wants to tell me about his worst Christmas day. ‘It was the one when I was raped by my half-brother’, he explains. That’s the thing about working with homeless people, you can connect with many of their experiences and then, suddenly, a yawning gulf appears, a devastating episode is described that creates an unbridgeable chasm. 'That must have been a terrible experience' I say, lamely. ‘Not really’, he replies with the numbed indifference I have noticed before in those who have endured acute childhood trauma, ‘he raped me on other days too’.

It is not the image of the family that has been the focus of the morning’s reflection and is a brutal antidote to the cloying sentimentality that has slowly beset our family-dominated conversations. This year he is spending Christmas with some friends, a couple who are both psychotherapists, and his spirits rise as he thinks ahead to Christmas day to come, a lovely man, respected by the group, battling some particularly vicious demons.

So these are the reflections, hopes and fears of the Saturday Club, a group of determined individuals drawn together by a shared experience called homelessness, gruffly affectionate towards each other, trading friendships, building up what we like to call ‘social capital’. They have lived extraordinary lives and many of their experiences of the street, prison and living outside the mainstream are unremittingly grim. Yet what each person strives for, and deserves, is not the drama of the homeless person’s life but the stability derived from a decent place to live, a job, friendships and family. They want a life more ordinary- with all the trimmings. Happy Christmas.

This blog was originally published in Inside Housing on December 13th 2013. A big thanks to my friends at the Saturday Club.