Destination died: We have to reduce the number of deaths from homelessness 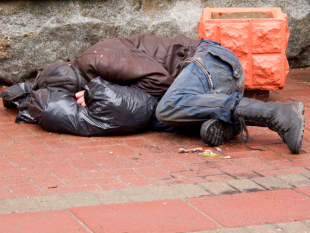 Big Fred’s funeral. Ragged singing arises from the small congregation of people gathered to pay respects and remember his 51 years of life. Some, unable to recognise the words in the hymn book, mime along, mouths agape, goldfish-like. There is the familiar mix of people; those who lived with him on the streets and in hostels alongside support staff from various organisations. Later we speak with wry affection, masking the unspoken frustration, about his obstinate refusal to move away from the streets, until his collapsing health gave him no choice.  Not an easy man was Big Fred, prone to incandescent rages when he would rip his shirt off in absurd display of grandiose exhibitionism.


Occasionally Fred would talk bitterly about living with foster-parents who resorted to tying him to a chair with a piece of clothes-line when he misbehaved. We remembered this when, yet again, his destructive behaviour led him to be evicted from a hostel and he landed back on the streets, not in order to excuse, but to understand.

So we shuffle out tight-lipped, thank the vicar and return to our work.  Another funeral of a person whose blighted life has been ended prematurely by extensive periods of homelessness.

And so what?  I’ve attended at least 50 such funerals. Many of the people we seek to help lead lives of consummate recklessness.  Excessive alcohol and drug misuse lay waste to many. Sleeping on damp cardboard in shop doorways produces grossly extreme medical case histories. We work with many people whose early lives are bleakly troubled and an early death is the almost inevitable consequence of inequitable life chances - right?

Yet there is a danger that the familiar ritual of attending another funeral means we become immune to the gravity of a life ended early. Recently some of us working with people who have suffered frequent bouts of homelessness (I strive to avoid lurching into using the generic term ‘the homeless’ as if we are describing a tribe or ethnic group, rather than a debilitating experience) have become uncomfortable with the way we seem to accept this apparently inexorable cull of vulnerable individuals. Gnawing away at us is, I believe, unease that we have become too acquiescent of such deaths, too ready to rationalise them as part of the job and not demanding enough in wishing to investigate more systematically how people have died and whether some deaths can be prevented.

There is an unintentional insensitivity in which we record the deaths of people who have experienced homelessness. Take, for example, the CHAIN data scrupulously inputted by the various street outreach teams working across the capital which provides information on people met sleeping rough and their subsequent journey from the street and into accommodation. If you search hard enough you will discover in the most recent annual statistics that under ‘departure from temporary accommodation: other’, the destination for 24 people was ‘died’.  Under ‘departure from long-term accommodation’, you will find that ‘the reason for leaving’ for 32 individuals is described as ‘death of tenant’, chillingly a figure that accounts for 10% of the ‘tenancy ends’ over the year.

It is nobody’s fault but it feels wrong that these figures are hidden away, un-interrogated and unwittingly dehumanised. Happily there are moves afoot to ensure that we pay greater attention to these grim statistics. Homeless Link and Housing Justice are hosting an event in June to place these mortality figures in the spotlight. Those organising the event are heartened by the enormous interest in it and the rising eagerness, indeed determination, to explore how we can reduce the number of deaths amongst the highly vulnerable population served by the homelessness sector.

It would, of course, be unfair not to acknowledge the great importance that providers and commissioners place on applying formal safeguarding arrangements in order to reduce risk and protect the vulnerable, or the many instances of humane, effective responses that have followed in reaction to unexpected deaths.

One of the best examples that I am aware of in recent times followed the tragic death of a rough sleeper in Lambeth in the winter of 2010. To its enormous credit, the local authority initiated a serious case review to explore whether anything could have been done to have prevented this death. The review concluded that, in future, the Mental Capacity Act (2005) should be more frequently applied in circumstances where an individual is unable to make rational decisions on their own behalf.

It would be extremely instructive to track the number of serious case reviews that have been initiated following the death of a vulnerable person with a history of homelessness. What have we learnt from these, what were the factors that led to the investigation being triggered and have there been similar tragedies where serious case reviews have not followed as a response and, if so, why?

There will be those who will feel that any suggestion of complacency about the deaths of vulnerable people who have suffered from homelessnesss is unfair and insulting to those working with them. Yet I believe our stoical acknowledgement that death will come prematurely to many of those we support mustn't cross the line into a passive acquiescence of numbers that should more often make us recoil with dismay. For, bluntly, if we are not in the  business of helping people live long and fulfilling lives, then we must individually question what business we have being in this line of work at all.

This blog was published in Inside Housing on May 31st 2013